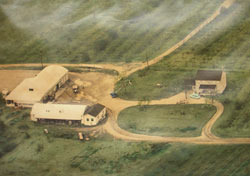 In 1952, Albert and Jeannette Giunco (Grocery Store Owners), of Belmar, NJ, brought a 250 acre cow farm in Freehold. This farm was a gift to their two sons John and Richard Giunco. John Giunco received his Agricultural Degree from Rutgers University and had plans for an apple and peach orchard on the farm. Suddenly, John was called to serve his country in the Korean War. The apple trees were literally waiting to be planted, so the remaining family members and friends, continued to plant the orchards.

The original farm was called Twin Lakes Orchards and was located between Gravel Hill Road and Thompson Grove Road in Freehold and Manalapan Township. Over the years, apples, peaches pumpkins and various vegetables were grown and shipped all over the world. A state of the art packing house was located deep within the orchard where fruits were being packed and shipped and fresh apple cider was being pressed. Cold storage was an important part of keeping the apples, peaches, produce and cider fresh. 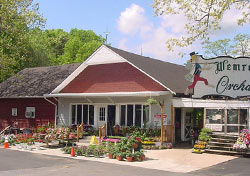 In 1967, an additional cold storage facility and packing house was purchased, which is now the current location of Wemrock Orchard's County Store. The additional cold storage facility was very important because it allowed the Giunco's operations to expand. Since this facility was located on a major road, connecting Princeton and Freehold (Highway 33), they saw the opportunity to sell their fruits on a road-side stand.

The Giunco's would haul apples, apple cider, peaches and other vegetables to the road-side stand. John Giunco's wife, Annette, would run the stand and Richard's wife, Frieda, would offer school tours of the farming operation.

Annette began to bring her handmade apple pies and peach pies to the "stand" to sell (same recipe that is used today). The public loved them and the business began to flourish so they decided to move the roadside stand into the packing house. That was in 1972 and this is where the country store still stands today. The bakery was installed and Annette began baking all kinds of beloved treats like apple cider donuts, apple and carrot cakes, cookies, brownies and of course, her famous pies. Pies like Apple Crumb, French Apple, Strawberry Rhubarb, Pumpkin, Pecan and Coconut Custard. Everything she baked was just like grandma used to make - homemade! Using only the best ingredients and no preservatives proved to be a winning combination! 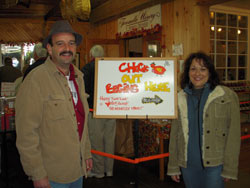 The family continued serving the public for many years. In 1986, John and Annette retired and sold their half of the business to Richard. Richard and his son, Richard Albert and his oldest daughter Jean-Marie took over the Country Store and Bakery. Richard Sr. and Richard Albert were also in charge of farming and in 1986 opened one of the first pick your own pumpkin/ hayrides in Monmouth County. Wemrock's Pumpkin Patch still resides on Gravel Hill Road on the original farm and hayrides are offered in the Fall. The three also purchased two other small farms in the late 90's which are located 400 feet west of the Country Store on Highway 33. This is the location of their new Berry Farm.

In 1987, Jean-Marie, created a new school tour program. Children from all over the state visit Wemrock Orchard's Store and Farm to learn how fruits are grown, pies are made and get a chance to pick their own pumpkin or strawberries. As a special treat, they get to taste Wemrock's famous apple cider donuts and fresh cider.

Richard Sr. passed away in 2003, leaving his children to carry on the family business. Another daughter, Lisa, returned to the business in 2005. With a second generation now operating the farms and store, it is most likely, that you will get the opportunity to meet a member of the Giunco family when you visit Wemrock Orchard's Country Store.